Getting A Massage Shifted My Relationship With My Body

Letting my body be seen and touched seemed like the scariest thing I could ever do — but a massage turned out to be a necessary step in my recovery. 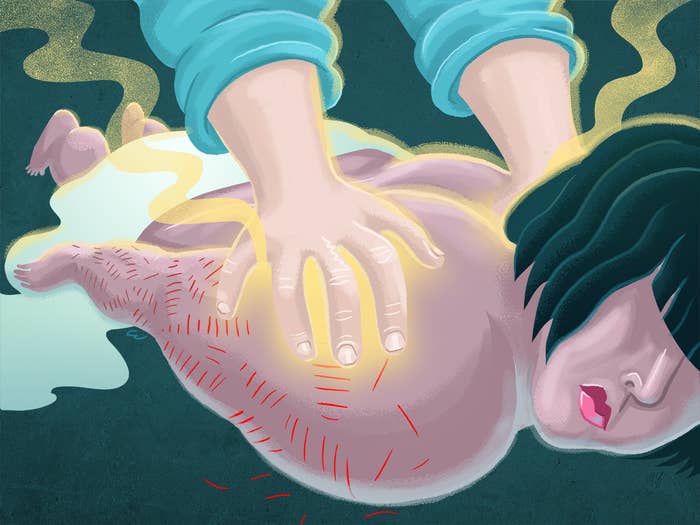 Lying facedown and naked on the table, I became more and more convinced I was making the biggest mistake of my life.

An old injury, a pinched nerve in my upper back, had been causing me a great amount of pain. For a while, I tried to play it off as no big deal — I’d certainly been through things that were more painful — but each time I attempted to lift my backpack or bend over to write, I would visibly wince in pain, causing my friends to exchange concerned glances. After months of this, I’d finally gotten fed up enough to do something about it. I’d thought about going to physical therapy, but I've already spent far too much of my life in hospitals to enter one voluntarily. I decided a massage studio would be warmer and less clinical — even though getting a massage was something I swore I'd never do.

Then again, I never thought I would go to rehab either, and here I was, six months out of eating disorder treatment and trying to push myself to try new things.

I've never liked being touched. Growing up, I was uncomfortable with physical displays of affection, instinctively squirming away any time my parents hugged me. My sister used to beg me to cuddle in bed with her, and every one of these interactions would end up with both of us upset. The one time my mom tried to convince me to pamper myself with a manicure, the lady doing my nails laughed as I jumped in my seat with every bit of contact. It was the first and last time I'd try it.

The only thing that bothers me more than people touching my body is my body itself. My appearance has always been a constant source of shame, and growing up I did everything in my power to ignore it. I don't remember a time in which I didn't stuff my feelings deep down inside me with heaping servings of peanut butter and chocolate chip cookie dough. Because of this, I spent my childhood being significantly larger than my peers, and I did my best to disguise it. All of my shirtsleeves had to be at least elbow-length in order to hide the rolls of fat on my upper arms, and I refused to wear shorts or dresses unless they cut off below the knee.

I was continually barraged with the message that my body was unacceptable — that there was something inherently wrong with me, and I needed to be fixed.

But this preoccupation with my body wasn't mine alone. Well-meaning adults would question each bite I took, asking whether it was something I really needed, and offering me dieting advice. I was on Weight Watchers when I should have been coloring; I was undergoing bariatric surgery when my friends were still playing four square. I was continually barraged with the message that my body was unacceptable — that there was something inherently wrong with me, and I needed to be fixed.

Recently, the pendulum of my eating disorder started to swing in the other direction. Rather than stuffing my feelings, I was starving them — eating just enough calories so that I wouldn't black out while I was jogging (late at night, of course, when it would be too dark for anyone to see a body I saw as disgusting). Weight melted off quickly and dramatically. People around me started to notice and compliment my figure, and with these new eyes on my body, I became even more acutely aware of it — along with each of its imperfections. No matter how many therapy groups I attended on body image, no matter how many positive affirmations I posted on my mirror, this new attention terrified me.

In treatment, you talk a lot about rock bottom — the moment that made you realize, as Alcoholics Anonymous puts it, that your life had become unmanageable. For some, rock bottom meant things like waking up in a hospital bed or jail cell after their umpteenth overdose or DUI. For me, it was driving around an unfamiliar city in search of the store that sold the specific brand of razor blades that I fancied to (once again) tear apart my own flesh, a compulsion that developed as a result of a lifetime of self-loathing.

Every piece of me deserves love and care — even the pieces I'm ashamed of.

It was the fall of my sophomore year in college when I entered treatment, and even though my rehab buddies and I were all struggling with similar underlying issues, I’d be lying if I said I didn't stand out. I easily weighed twice as much as any of them, and my arms and legs were covered in fresh slits. My stories weren't about things I'd done while high on cocaine, or philosophical discoveries I'd made while on acid. My fellow patients were both mildly amused and horrified as they taught me how to light a cigarette on the smoking patio. On top of all of that, I’m deaf — so even when they did venture into topics I could relate to over dinner, I was often lost amongst the noise in the dining hall. I kept to myself. I was used to being an outcast, being observed by others with mild fascination.

When I left rehab — after 45 days spent without access to a computer, cell phone, or even a book that wasn’t “recovery-focused” — my transition back to everyday life was simultaneously terrifying and exhilarating. No longer did I start each hour by reporting my feelings from an emotions chart. I'd take phrases I'd learned, like, "That's your reality," and deploy them ironically to annoy my friends. But some days I longed for the structure and safety of rehab. I found myself stumbling through an old environment trying to establish new habits and use my voice. I fixated on health and wellness, half-fooling myself and those around me with the assertion that a few spoonfuls of miso soup was an acceptable dinner choice, but also trying to live a life that would allow for self-care. I hoped a massage would provide some relief.

When the massage therapist entered the room, she introduced herself in a soft, soothing voice. Her name was Jessica, and she seemed friendly enough, her small frame dressed casually in sweats. She urged me to relax as I clung to the thin sheet on top of me. It was the only thing separating her from the body I so fiercely despised, the body I was scared to let her see. Other than my doctors, no one had ever seen my body naked — boys have never been romantically interested in me, and I never really blamed them for it — so it was hard to take this lightly. I closed my eyes and let in a deep breath. I tried to distance my mind from the body that was weighing me down. I took off my cochlear implants, silencing the world and doing my best to fill my mind with positive thoughts. I reminded myself I was paying this woman. Surely she wouldn't laugh at me — at least not if she wanted a good tip.

I jerked back the second I felt her warm hands wrap around my shoulders, but I tried my hardest not to react to her subsequent touches. Jessica began by tending to the knots in my neck and upper back, loosening muscles I didn't even know I had. To my surprise, it felt incredible.

Then she worked her way to my arms. I felt each muscle in my body turn to stone.

When I'd made the appointment, I hadn't imagined she'd pay attention to anything beyond my back and neck. I wasn't particularly excited about it, but before I could gather my thoughts enough to protest, her fingers were delicately pressed against the dozens of scars on my forearms, the products of several years' worth of late night depression and body shame. I bit my lip. She rubbed her thumbs along my textured arms, strong, as if she were wiping away the now-faded whitish-pink scars completely. It felt nice.

I held my breath as Jessica pushed her thumbs into the curtains of excess skin and lumps of fat hanging off of my limbs. I tried my best not to tense up when she massaged my abdomen, full and round and marked with its own set of surgical scars. I repeated to myself, over and over, that I was practicing self-care, that I was doing a positive thing for both my mind and body. Though I panicked for much of the 45-minute session, I also relished every second of it. Every piece of me deserves love and care — even the pieces I'm ashamed of. And at the very least, my back was already feeling so much better.

Jessica wafted some incense below my nose and gave me a light tap to signal she was finished. I breathed a sigh of relief, feeling how tightly I had been clenching my jaw throughout. She left the room so that I could get dressed, and I hurriedly slipped on my clothes and tucked my sound processors back behind my ears.

A light knock sounded at the door, and Jessica returned. "May I comment on something?" she asked.

A lump formed in my throat as I nodded slowly. My mind racing, I debated whether she would question my scars, or comment on the hideousness of my body. Before she could even open her mouth, I made a silent vow to never let anyone see my body again.

She said in a calm voice, "I felt a lot of protection in your muscles. Whatever they're protecting you from, it's OK to relax. You're safe now."

My massage session did not magically cure my depression, eating disorder, or even the pain in my back. My health worsened shortly after, a direct result of my failing to give my body the nourishment it was crying out for. And yet, rather than continuing to hide my body and cower in fear, I reached out for help, returning to daily treatment, and recognizing that this wasn't a personal failure. My massage was a stepping stone on my journey toward healing. It planted a new thought in my head: Maybe I deserve better. I deserved more. I reached out for more.

My body may never be something I’m fully proud of, but it is mine. I have developed a newfound protectiveness for it, a desire to keep it healthy and care for it as I would a dear friend. Instead of punishing my body by using razors, overeating, or starving, I gave it love. Or rather, I asked that Jessica did, but I figured that was a pretty good start.